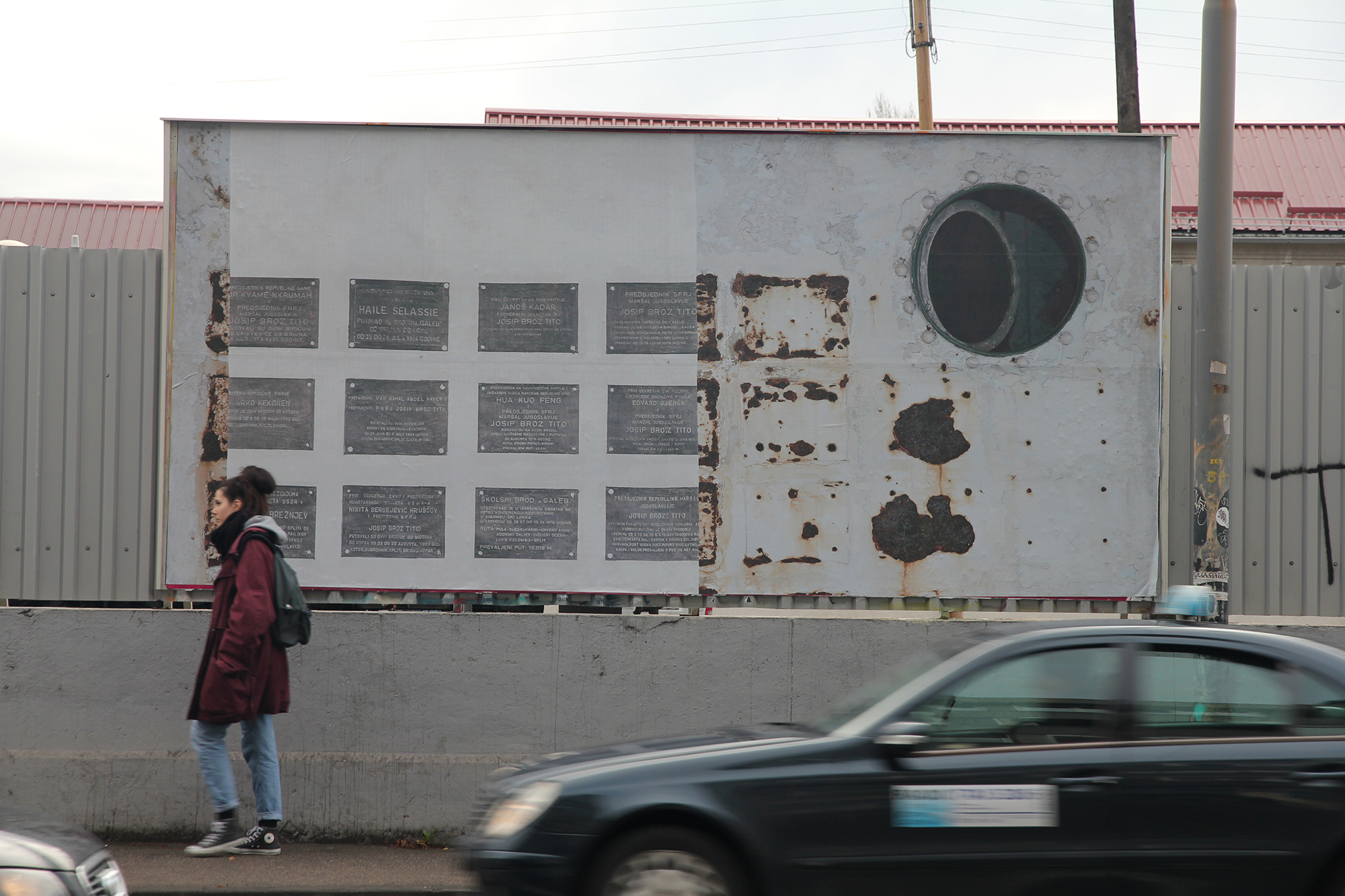 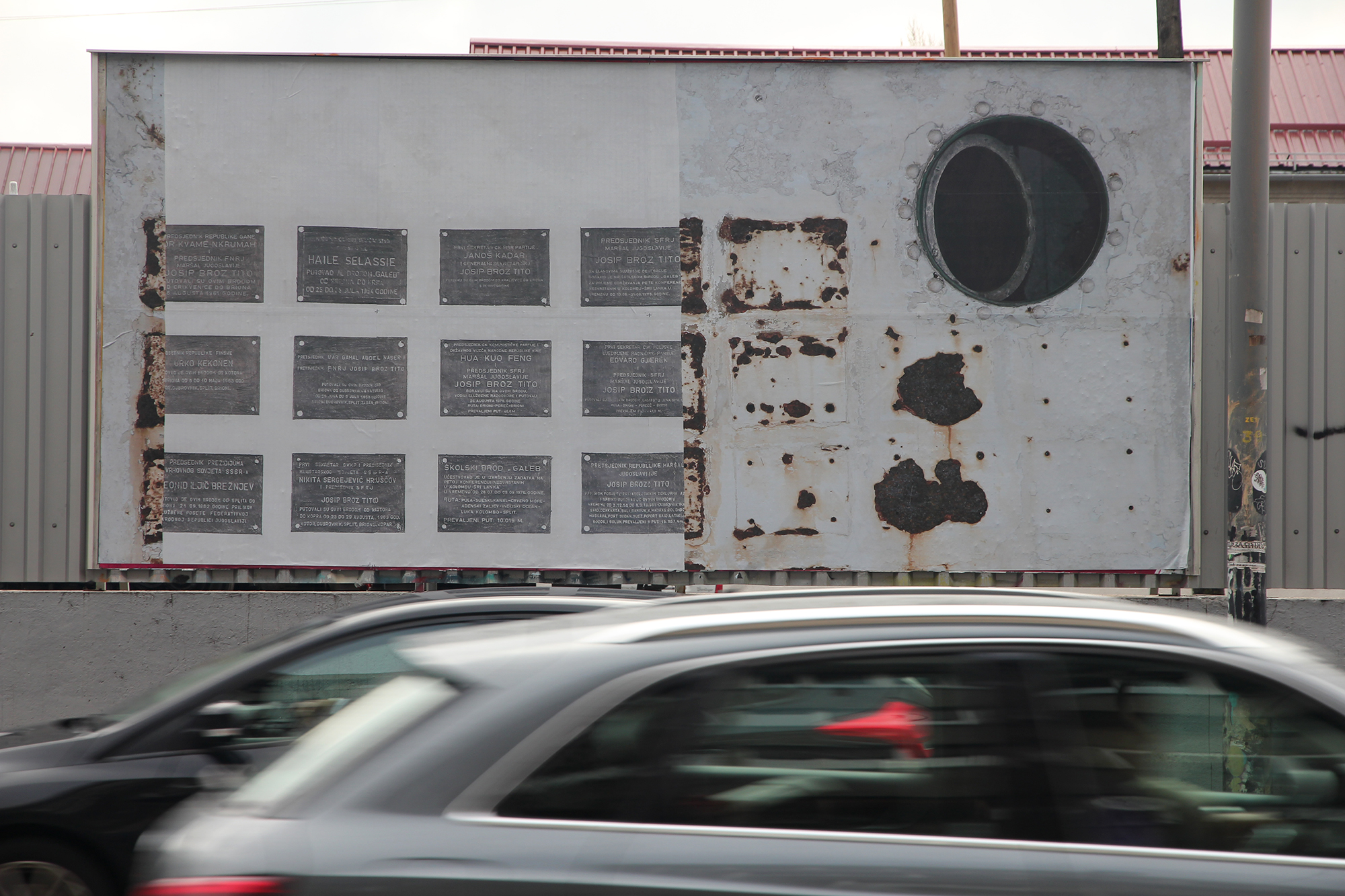 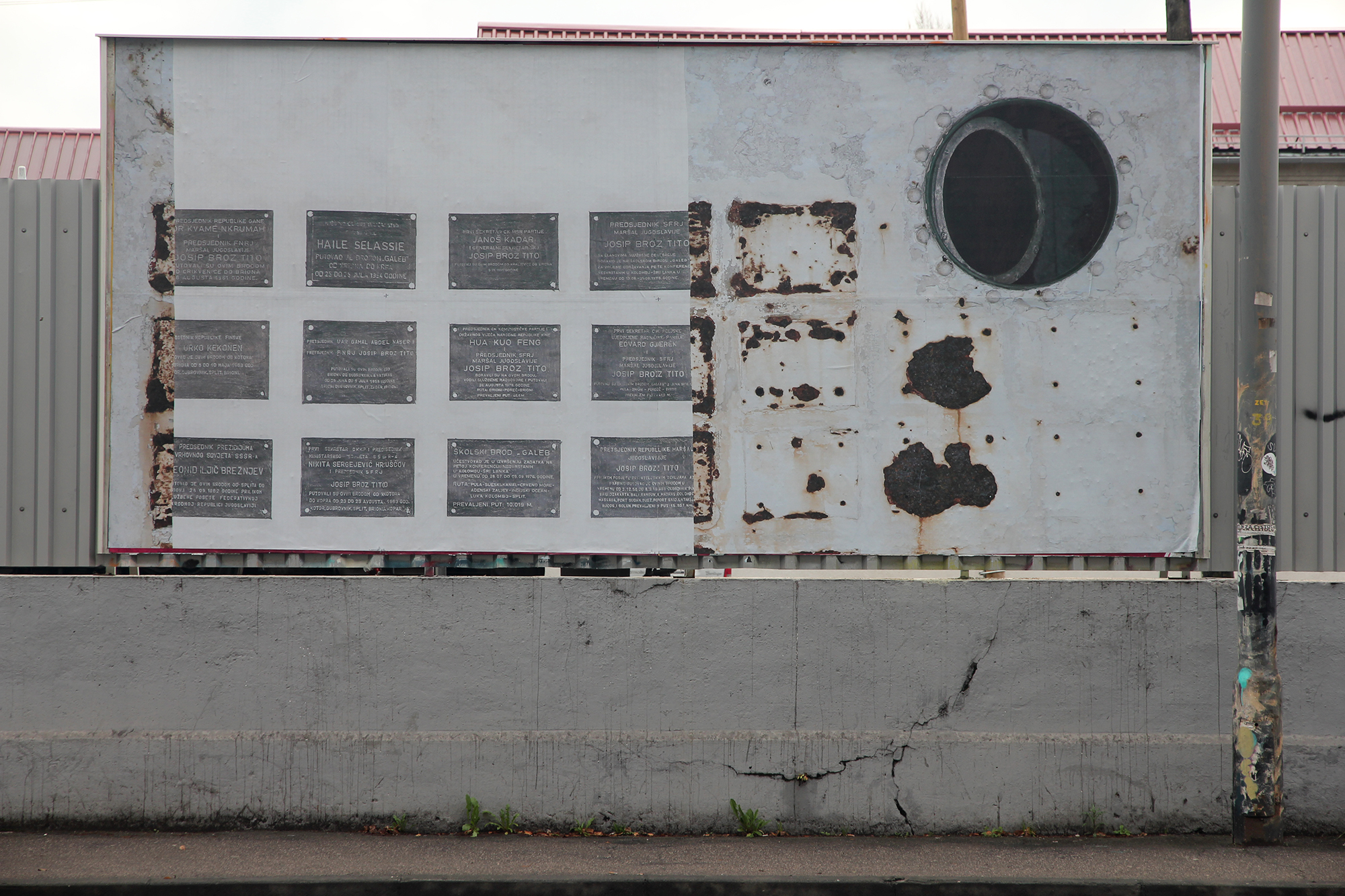 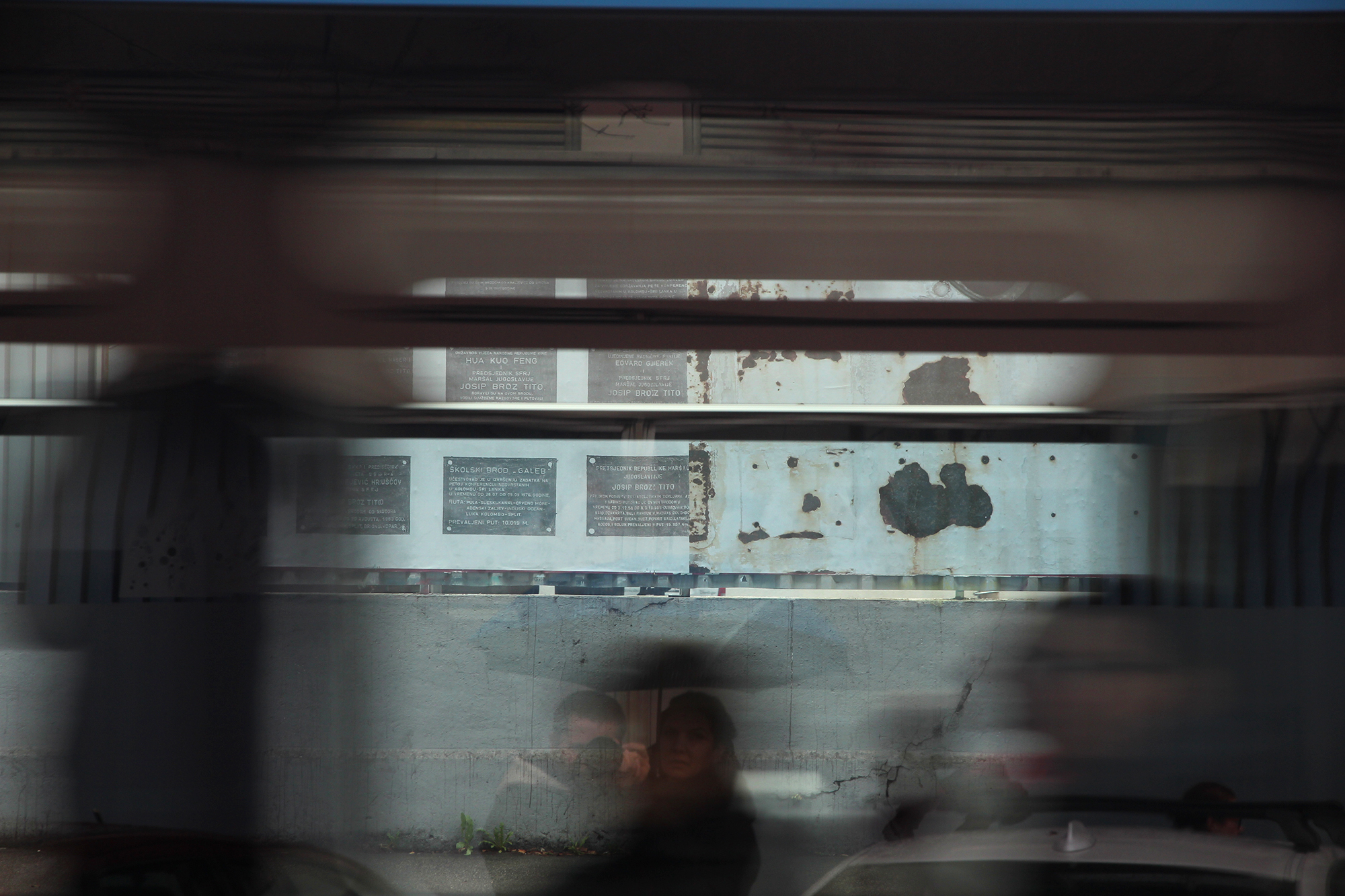 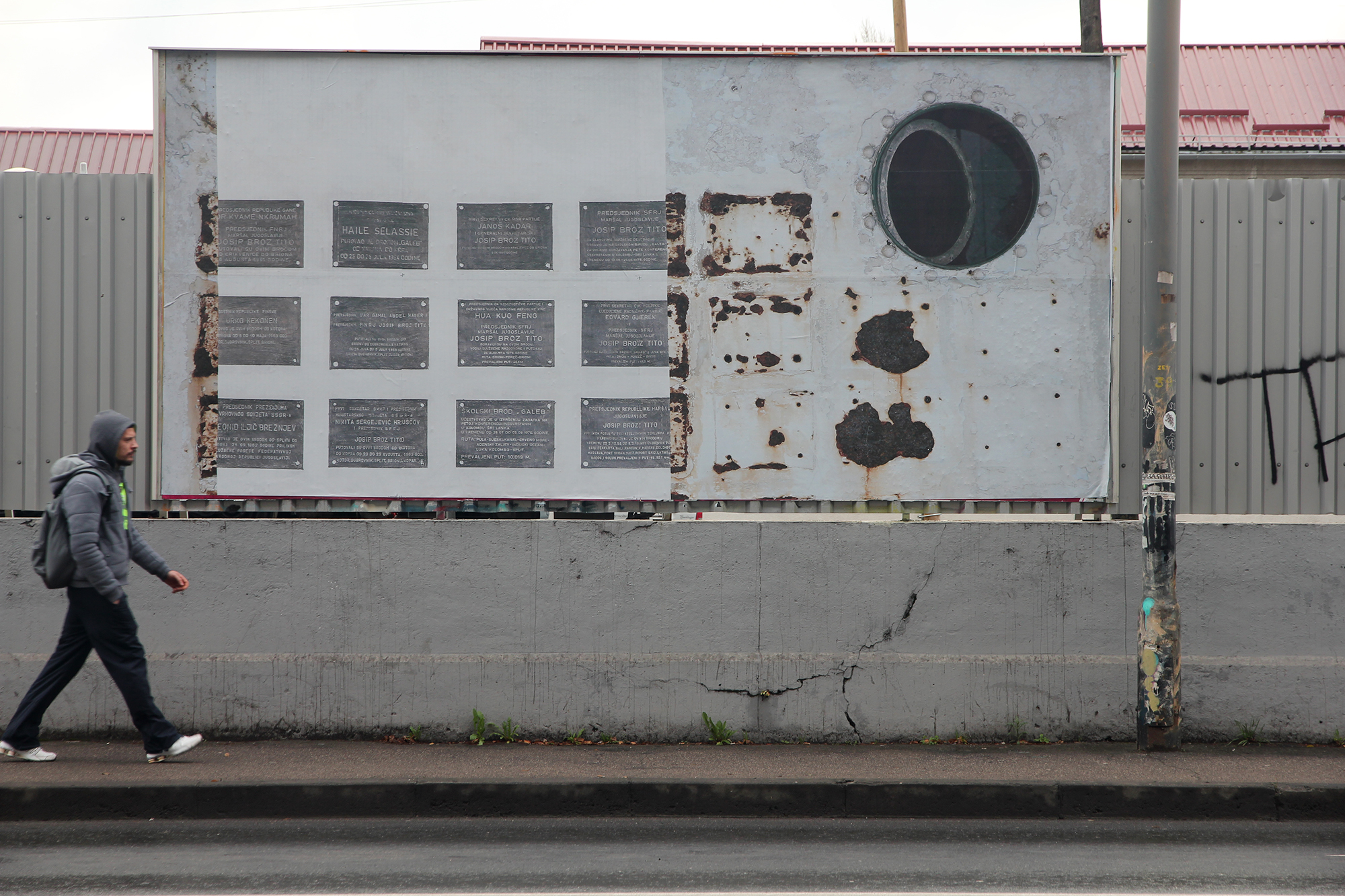 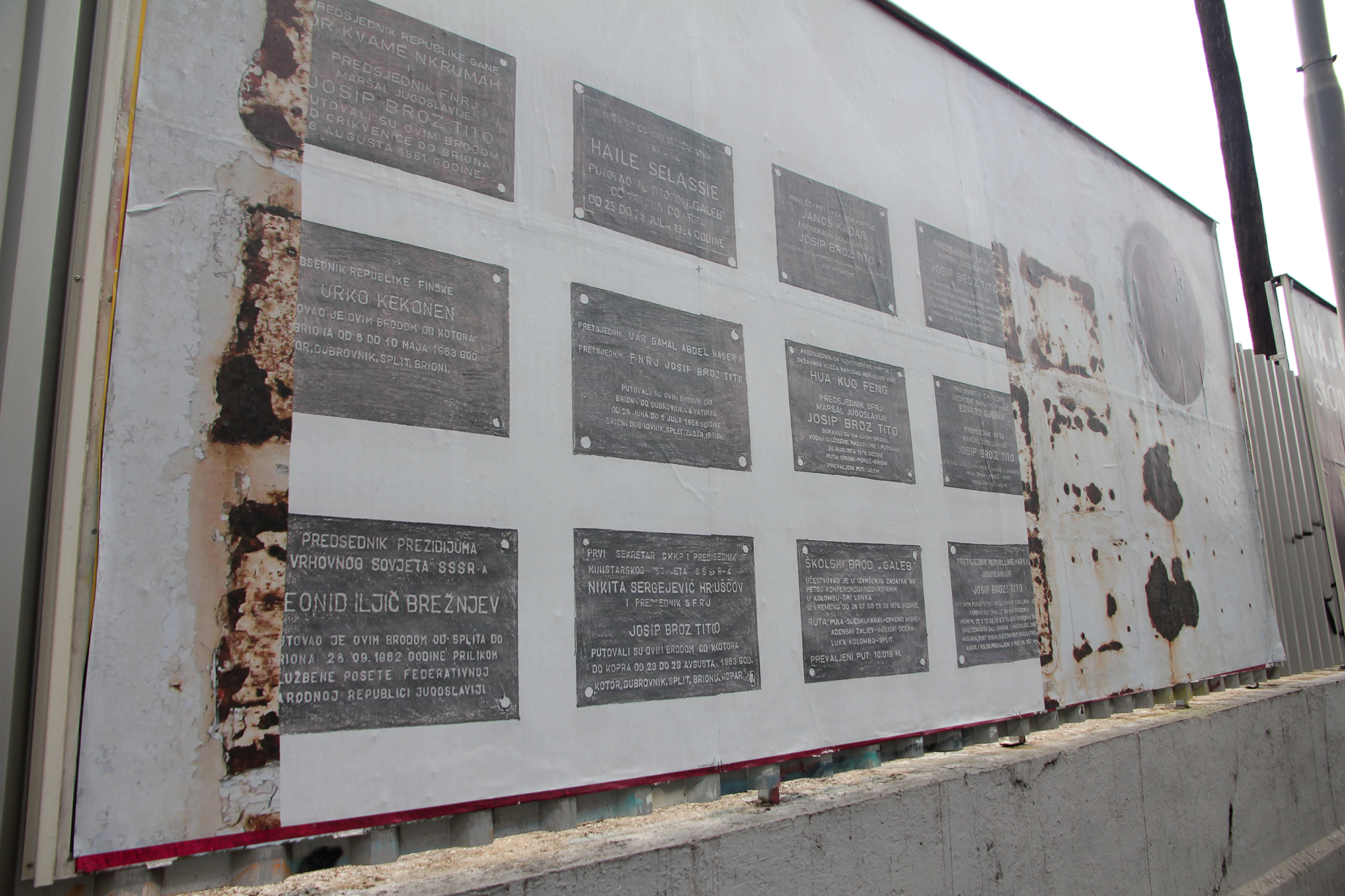 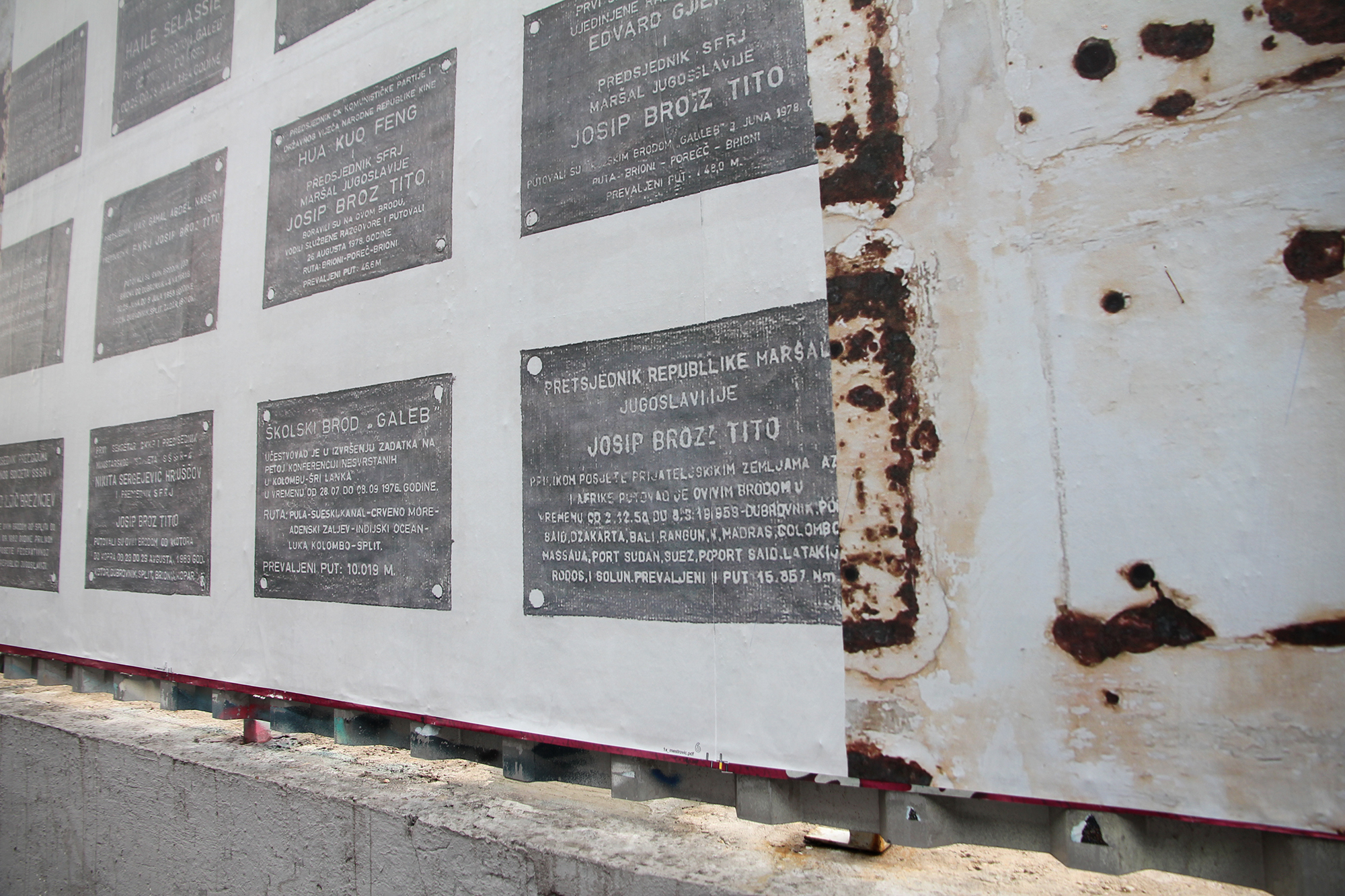 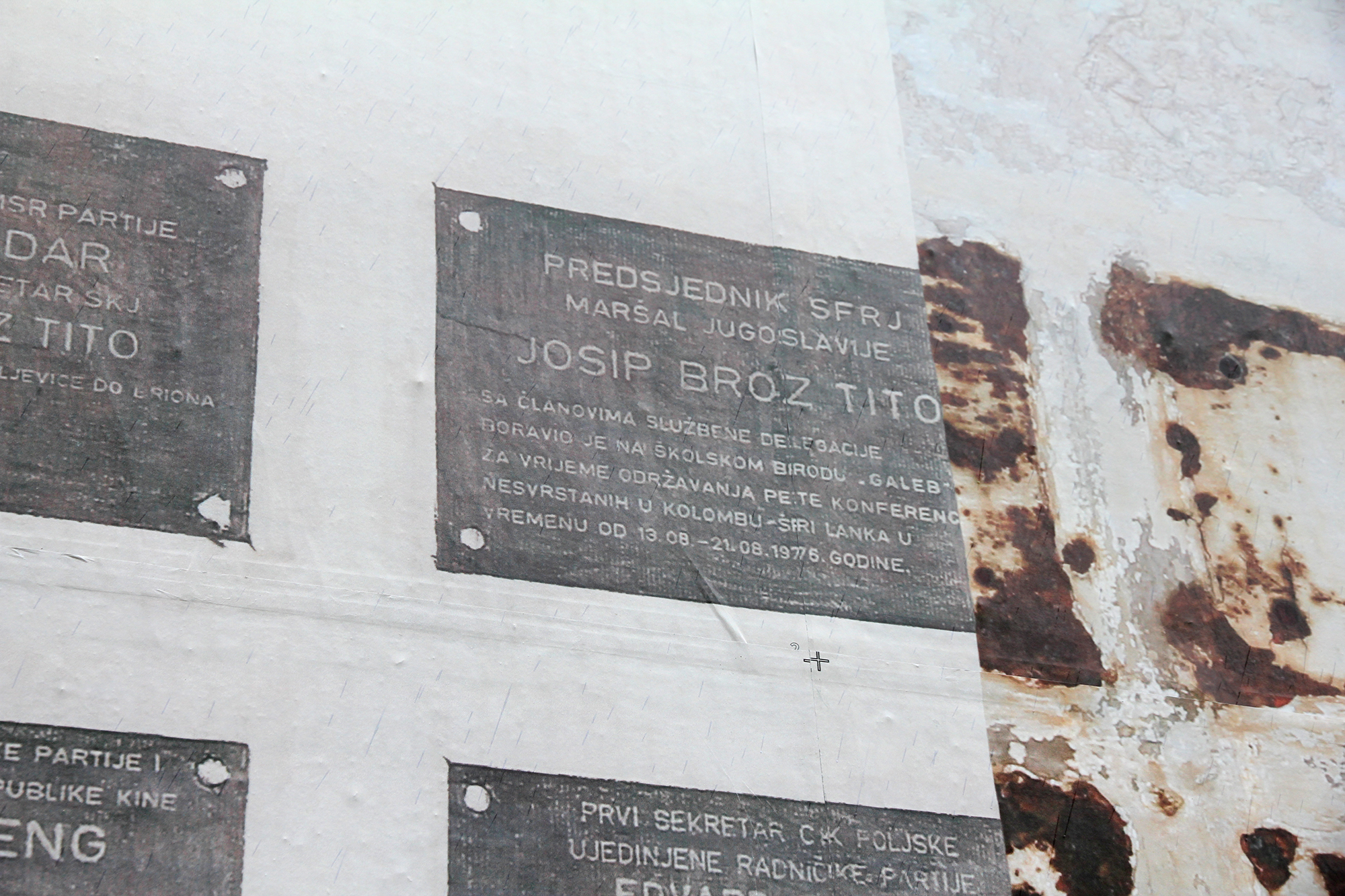 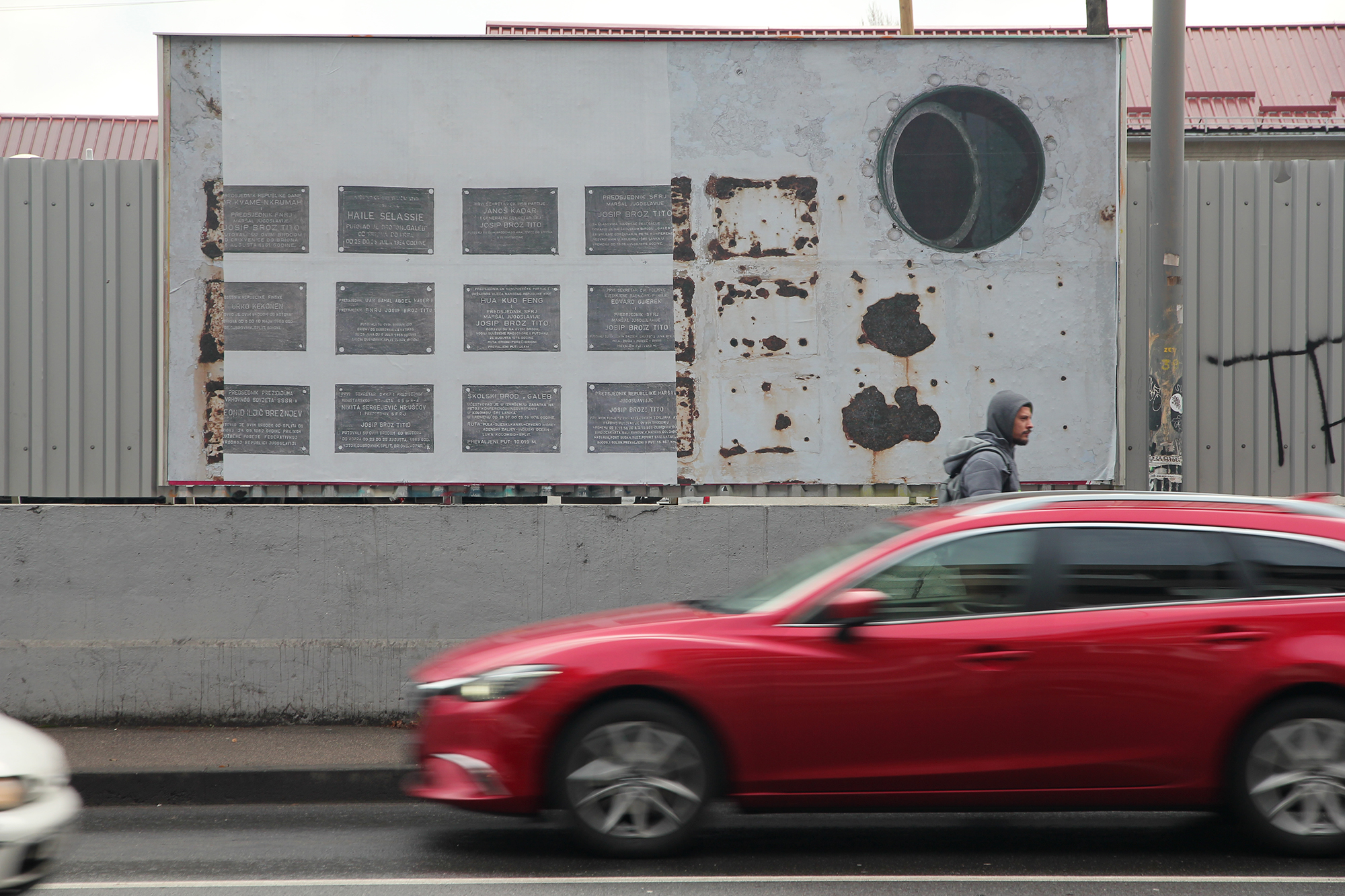 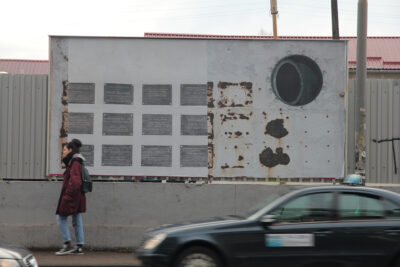 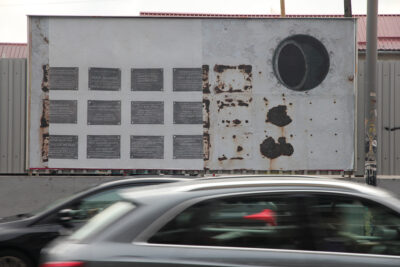 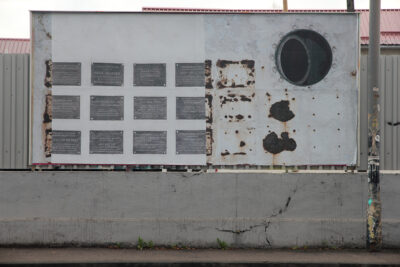 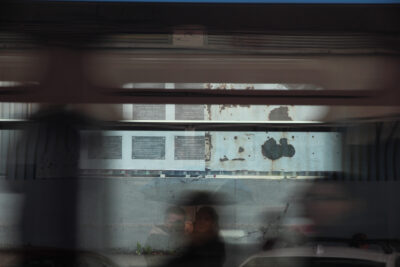 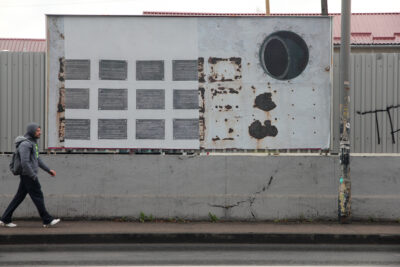 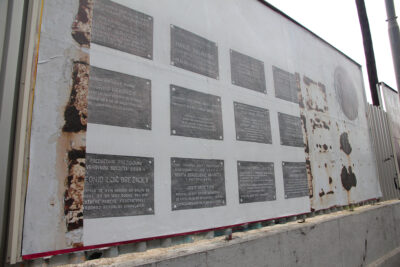 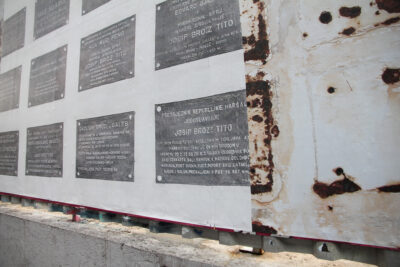 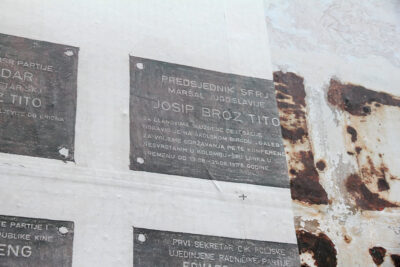 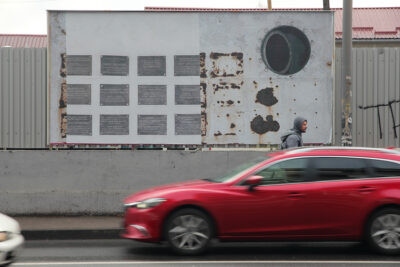 Curator and author of the program: Silva Kalčić.

Nadija Mustapić and Toni Meštrović draw attention to the current state of the Tito’s luxury yacht “Galeb” (eng. “Seagull”) as it is expecting full makeover into a ship-museum, which will get new commercial and primarily touristic contents. Mustapić and Meštrović have photographed one of the external walls of a ship’s deck, the traces of removed plaques that contained names of various Tito’s guests on “Galeb”, information about sea routes, destinations and crossed nautical miles on various journeys (the ship was the site of decision-makings and signings of documents… During the 5th Summit Conference of the Non-Aligned Movement in Sri Lanka, the ship hosted all the statesmen present in Colombo.) The image juxtaposes traces of something that has been removed and traces of something that could be that which was removed; now returned back in place but in a somewhat different form.

“Contracting time impoverishes, empties all our cultural signs and activities – turning them into zero signs“ or, rather, as Agamben calls them, weak signs, referencing a term introduced by Walter Benjamin “weak messianism”. Furthermore, Boris Groys (in his text “The Weak Universalism”, 2010) states that such “weak signs triumph over the strong signs of our world – strong signs of authority, tradition, and power, but also strong signs of revolt, desire, heroism, or shock.” Mustapić and Meštrović pose a question about how we see and treat documentary artifacts, which for some reason are not considered desirable today. Certainly, they refer to the removed historical layers, but also the time and the ideology of the Non-Aligned, as well as to the other documents and historical facts and the larger national topics of relating with own history, the current situation of equating antifascism with totalitarizam and the problem of revisionism of history. The subtopic is the aesthetics and the poetics of the image and the material that speaks of timely and ideological distance from its original form; the dilapidated wall with corrosion marks, the detail on the image that resembles a port hole of a ship…, the layers of paint that peel off and the traces of something that had its ceremonial place, a title or a sign that became muted, nameless, “distitled”. Then there is also that which has been removed and now treated as archival and documentary material. The wall from which the titles of plaques have been removed is untitled, as a generic title often used in the context of art, yet here it is used conceptually as a name of the artwork Destination: Distitled (croatian: Destinacija: bezimena) simultaneously evoking the question of the destination – of a journey taken by the ship or the journey that the society is on. While thinking about how to work while holding such an artefact in own hands, the authors have decided to transpose it using the frottage technique on paper – an ephemeral and less durable, fragile object superimposed onto the metal and corroded materiality of the wall. While hand-rubbing the image, the ghost of the transposed image slowly appears on paper and the graphite leaves traces on hands – such hand treatment of materials has a strong poetical dimension. Frottage is image transfer and as such it has a different meaning from the original image, its quality is “poor” in the sense Hito Steyerl uses the term “poor image”. “The poor image is a copy in motion. Its quality is bad, its resolution substandard. It is a ghost of an image, a preview, a thumbnail, an errant idea, an itinerant image distributed for free, squeezed through slow digital connections, compressed, reproduced, ripped, remixed, as well as copied and pasted into other channels of distribution. The poor image is a lumpen proletarian in the class society of appearances, ranked and valued according to its resolution. The poor image tends towards abstraction: it is a visual idea in its very becoming.” (Hito Steyerl, “In Defense of the Poor Image”, 2009).

Frottage stands here also as a “common place”, the embodiment of the continuous problem of disappearance, loss, removal, erasure of the “original“ and the attempt to bring it back. Just as the corroded traces on the wall in places where the plaques have been taken off, besides from being a concrete location on the ship Galeb, within a larger national context of erasing collective memory of the socialist and antifascist period from recent past, become a sort of a “common place” of erasure (i.e. the erasure of Tito’s name from all street and square names, the removal and destruction of monuments, etc..).This is not political art, but making art politically – by shifting focus from what is being shown onto what art does and how it does it. (Hito Steyerl, “Politics of Art: Contemporary Art and the Transition to Post-Democracy”, 2010).